My kids fight me every.single.time we need to transition from our comfortable home life to the frenzied routine of preparing for and heading out the door for swim team. “We hate swim team,” they repeat, three of the four of them, one after another. I rationalize that we’re participating in swim team to stay in shape– in fact, I remind them, I ONLY make them go to two practices when most parents require their swimmers to attend all five each week. To add to my level of extreme generosity, I only make them participate in the minimum number of meets required to qualify for Championships. I’m nicer than most parents, I remind them. And so we did this for many years and endured several meltdowns… until what I heard one day through their pleas that what they really want is more family time and less on-the-run time.

And so we settled on this understanding– if we aren’t going to swim, we’re going to have more family time, but we’re also going to pitch in around the house a little more than we have in the past…

And so the new routines have started (though swim team hasn’t completely ended yet)… I’ve let go of some of my responsibilities and have allowed the kids to take on a bigger part of our family time. They prepare their own lunches, do more chores around the house, and spend time in the evenings preparing the vegetables, fruit, and table for dinner. In the end, their contributions free me up for their much-desired family time.

I’ve been letting them dream alongside me– what will our next adventure be? What needs to be done in advance? What goals can we set as a family? How can we achieve those goals? What can each of us contribute? And then I let go of the wheel, and I let them take over. They’re capable and where they might have once lacked confidence, they grow exponentially.

Coincidentally, I’ve found some freedom in our new routines. I have new teammates in this family of mine– we set goals and we accomplish them together. I’m no longer on an island, and I’m able to offer support to my kids outside of the household expectations I place on myself. I like this freedom, and they seem to, too!

Sleep is in high demand amongst the Gingers. Last night the boys headed to bed around 8:30pm; we have this silly assumption that one day they’ll put their actual beds to good use. One slept on the floor of his room while the other made a nest of the pile of unfolded clean laundry (don’t judge) on the floor in my bedroom. When I come upstairs for what I expect will be a wonderful night’s sleep, I nearly trip on Ginger3 and decide to go check on everyone else. Ginger1 is comfortably sleeping in her own bed. Ginger2 found a spot amongst her dirty laundry on the floor of her own bedroom, and Ginger4 found his way to his bed. Off to bed I went. Around 1, my internal clock wakes me up to drag a groggy Ginger4 to the bathroom. After successfully convincing him the toilet is a better target than the sink, he heads back to bed, this time on his bedroom floor. I mosey back to bed to a snoring Oldest Ginger (I won’t tell you who that one is specifically, but you can use your best guess!). And it was useless– I couldn’t fall asleep. I get up and head to my favorite second dwelling– the couch downstairs. On my way, I decide to check on the other gingers, discovering Ginger1’s empty bed. What the heck!? I look around the house, unable to find her. I head back into my room to find her snuggled next to Ginger3 on the pile of clean laundry. (The Gingerdog likes this spot too– maybe I am missing out on something!– again, no judging!) Instead of going downstairs, I resolve to sleep in Ginger1’s bed. A short time later, right after I fell back to sleep, Ginger1 flips on the bedroom light. (Have I mentioned they all sleep with the lights on, too?) She crawls into her bed with me, smooshing me against the cold wall. I can’t sleep with the lights on, nor can I sleep against a cold wall (where, by the way, I am closer to GingerDad’s snoring), so up I went to greet the day and drink a whole carafe of coffee.

Jack (pointing at Cubmaster Dan Colpi): I know that guy. He ate a worms and crickets at Ryan’s meeting!
Me: Yep, he did!
Jack: Mom, why would he eat worms and crickets?
Me: Because his Boy Scout Pack hit a goal with their popcorn sales.
Jack: Ryan sold popcorn? Holy Crap!!
Me: Well, Ryan didn’t sell this year, but where did you learn “Holy Crap?”
Jack (casually): Oh, there’s a kid at school who teaches me bad words. He taught me the “s” word, the “d” word, and the “f” word.
Me: Hmm, what’s the “d” word?
Jack: I already told you! “Holy Crap!!” “Holy Crap!”
Me: Ooooh… hmmm. Well, it’s not a nice word. Maybe you should tell your friend to teach you nice words.
Jack: (In the backseat working on his “h” sound). Well, now that I think of it, I am not sure why we call it the “d” word when it doesn’t start with “d.” That’s dumb!

This picture was taken a few days after Emma was born. In a state of shock after delivering a 1 lb 12 oz baby, I was afraid to look at her and certainly didn’t want to hold her. It was like my maternal instincts hadn’t kicked in yet— the wires, the masks, the tubes were so intimidating. Sadly, I didn’t know my baby at all— I was so thankful the NICU nurses knew her rhythms and helped me learn what she was all about. And I was so grateful that my whisper, quietly echoing against the walls of the incubator, was enough to sooth her in those early rough days. All these years later, 11 to be exact, I am still a student of a fighting micro preemie and the nurses who taught me so much. Happy Birthday, kid!

I can be pretty impulsive, so when my almost five-year-old, not quite ready for Kindergarten, expressed an interest in learning to read, I jumped on it. Homeschool curriculum purchased, I finally had the time and was ready to teach my last child to read!

We’re on day 59, and though the connections are finally being made, we hit an impasse today… 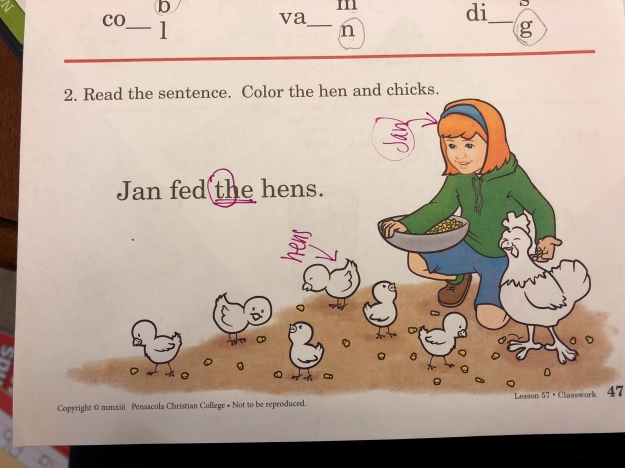 Me: Jack, let’s look at the picture. What is going on in this picture?

Jack: The girl is feeding those stinky animals.

Me: OK, let’s sound out those words.

Me: Not quite. Let’s try again. Use your finger to point to the words.

Me: Are you sure that last word is chicken?

Me: Well, this picture is deceiving, Jack. Let’s sound out the last word.

Me: Jack, there’s only four words, and here’s a hint– the last one isn’t chickens.

Me: Jack, it’s past tense. Let’s pretend it happened yesterday.

I literally smack my forehead and Jack starts laughing uncontrollably.

—(a half hour has passed, I have planned next week’s lessons and am considering a beer at this point)–

Me: Are you ready to stop laughing and get these four words down? I am not asking you to pretend you know the words. I want you to sound out the words on the page. And by now you should know “Jan” and “the,” so you don’t have to sound those out. You can do this– there are only four words.

Me: Are you sure that last word is chickens?

Back in the olden days, when Paul and I were dating, he drove a Jeep. We’d drive around Cincinnati worry-free (or at least it seems like that now that I look back on it), Paul teaching me the appropriate hand signals to offer other Jeep drivers, while I soaked in Cincinnati, trying to discern if this could really become my forever home. He didn’t think I was paying attention then, but I was (at least a little bit). Then the engagement happened, and Paul bought a used Ford truck from my dad’s company (maybe that would win him over?), and I had to learn the appropriate hand signals to offer other truck drivers. He didn’t think I was paying attention then, either, and he’s probably right– I was planning a wedding!! Either way, after thirteen years of lessons, I think I might have it down.

Somehow we managed to fit pumpkin carving into our chaotic schedule this weekend after a bunch of soccer tournament games and the Oldest Ginger’s team making it to state. Whoo hoo!!