It’s a sad day for this momma. I can no longer use haphazard logic to talk the gingers out of doing things. As we’re checking out of Meijer, Ginger3 pleads to sit on the automated horse for a penny. I tried convincing him that little babies with poopie diapers sit on the same horse. Ginger3 concluded, “I think you just say these things to make me change my mind.”
Darn it!

I love the confidence my girls gain while they are away for a week at Y Camp Ernst in Burlington, KY. They learn to do things on their own or with a group, choose activities daily that interest them, challenge themselves in ropes courses, swim with their cabins. Most importantly, they are put into cabins with girls they don’t know, they learn to build a small community, deal with conflict, and encourage one another throughout the week.

Though they come home exhausted, they come out of Camp Ernst nicer and more caring than when they left. They are more confident about themselves and offer grace to those around them. I love that it’s the same magic-packed week I experienced when I was a camper, counselor and staff member at Phantom Lake Y Camp. 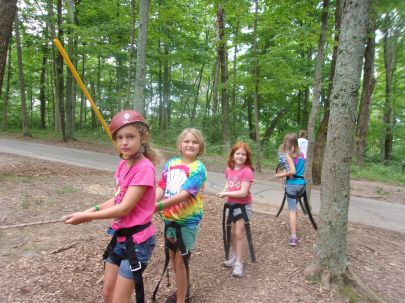 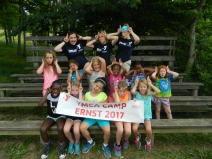 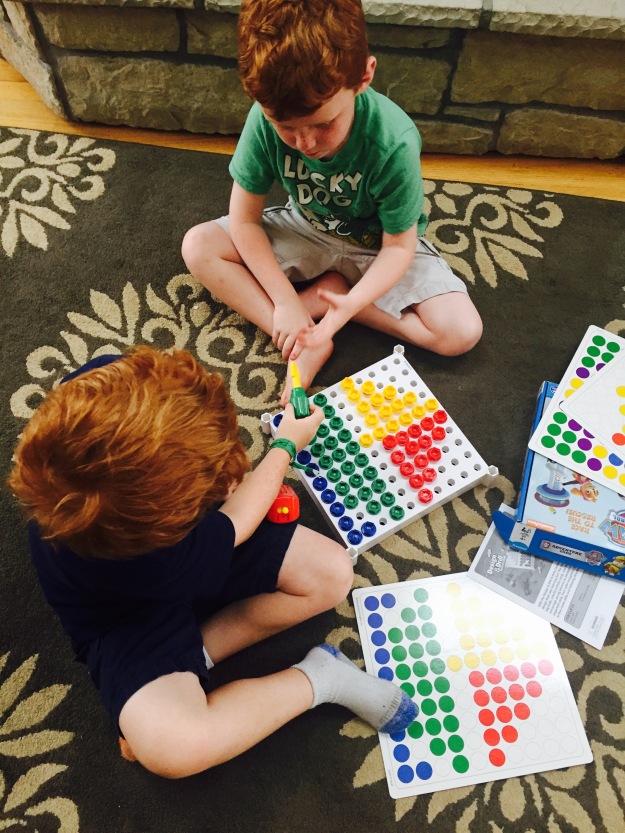 Because of some fun neighborhood traditions my childhood friends created long ago, I decided our neighborhood needed some of our own. I created what we call “Wacky Wednesday.” Wacky Wednesday happens during the summer– it is a weekly evening activity that families take turns planning and executing. The idea is that everyone takes a break from electronics, bringing families, neighbors, and friends together to have fun. We might go on a hike, play whiffle ball, engage in kickball, or collect donations for various outreaches. This has become a fun way for adults and kids alike to engage and build community, and the kids love and look forward to all the fun each week.

Wacky Wednesday has taken on a life of its own. Other neighborhoods are building their community in similar ways, and it’s awesome to see their posts on social media. I love that we’re engaging with one another, enjoying summer childhood fun, and building family and community.

When Ginger4 was denied from a PreK program for not being 5 by a PreK cut-off date of (8/1), I went in and fought with our preschool administration on his behalf. Here was a kid who needed Kindergarten, whose 3s teacher recommended PreK, if not early advancement into Kindergarten, but whose age was prohibited with the district cut-off. Our private preschool chose to align itself with the district cut-off, only allowing children who are already 5 by 8/1 into their PreK program. When challenged, its administrators suggested I go look into other programs. Off I went, making phone calls, taking tours and compiling lists of various programs whose PreK programs had a later cut-off– 12/31 was the most common one out there. When presented with my findings, various excuses were made by our administrators, including one about licensure. As an educator myself, I know where to go to debunk their understanding of the laws, and I did. No response. Quickly I learned our current preschool wasn’t really doing the research necessary to defend their stance on the 8/1 cutoff date.

The majority of research online pointed to PreK programs for old 4-yr-olds. In fact, there was very little discussion about the benefits for a PreK program to solely serve 5-yr-olds– 5 yr olds who, by our local district, are candidates to enter Kindergarten. Why, then, would I not be able to make the opposite decision to advance my child into a private PreK program– especially one that he misses the Kindergarten deadline by a month and ten days? I can understand a public school Kindergarten taking such a hard stance on a cut-off for Kindergarten, and I even understand the reasons behind grade acceleration processes, but for a private (small church) preschool to dig their heels in and not allow a family (whose four kids have attended, and whose parents have supported and advertised their program) to make a decision on whether or not to put their child into a PreK classroom? This baffles me!

In my research, I learned where it gets fuzzy is when preschool programs use the term “PreK” to describe any programming provided before age 5 (Kindergarten-aged children.) This is where I believe it’s up to the parents to decide what is best for their child. In Ginger4’s case, he’d be turning 5 on September 10th… he scored high in his cognitive testing with a psychologist, and I believe would be a perfect candidate for a PreK program. When I described our situation to various preschool and elementary school administrators, and even the gifted education staff within our public district, I was given the response I thought I would… no one understood why our preschool would prohibit Ginger4 from attending their PreK program at age 4 years and 11 months.

I maintain private preschool administrators need to allow parents to make some decisions based on their individual circumstances.

Further, there is a reason our current preschool differentiates between a 4s program and a PreK program… yet, in my discussion and challenge phase with the administration, I was told these programs are synonymous. Yet every family I know whose child went through the PreK program touts about the amount of writing their child was exposed to in PreK– that their child’s preparedness for Kindergarten was on target. I agree– my previous child who experienced PreK had a very different experience than my others who attended a 4s classroom. The fact that our 3s program is mostly play and doesn’t do letter/number recognition goes to show what would be handled in the next sequence of skills in a 4s classroom. And Ginger4 knows his letters and his sounds and could benefit from putting those two skills together in a classroom more advanced and ready to write!

All this research and back and forth has taken its toll on me. I cried quite a bit about leaving a preschool we had spent our last nine years with, but I know I need to find something better for Ginger4. Further, I feel like a sucker for promoting and recommending this program to so many young families in the area. I love the staff at this preschool, but was saddened when the administration took such a hard stance on this PreK issue. Alas, and unrelated to our family situation, a good number of the staff I have loved and cherished have moved on to other jobs. I often wonder if there’s a connection to its leadership. When I step back and look at our situation as an outsider, I think, “Good grief! All this for freakin’ preschool! What in the heck is yet to come?”